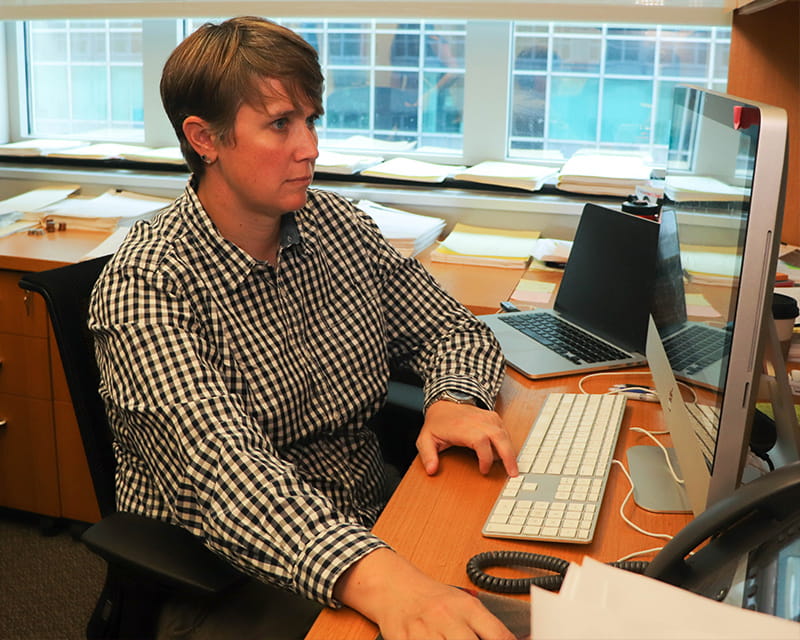 A study led by researchers at The Ohio State University Wexner Medical Center has revealed a fat molecule, released by energy-burning brown fat, that could help protect the heart—potentially leading to new therapies for treating cardiovascular disease.

The scientists also were the first to find that the fat molecule, or lipokine, is decreased in people with heart disease.

“It’s been suggested that brown fat could help protect the heart. Our study is the first to identify a direct role for brown fat to mediate cardiac function, which happens via the release of the lipokine, 12,13-diHOME,” says Kristin Stanford, PhD, an associate professor of physiology and cell biology at the Ohio State University College of Medicine and the Dorothy M. Davis Heart and Lung Research Institute. “We believe it’s a novel potential therapy for those suffering from cardiovascular disease, especially since we’ve found lower levels of this lipokine in patients with heart disease.”

Dr. Stanford and Mark Ziolo, PhD, a professor of physiology and cell biology at Ohio State, are the lead authors of the study published in the American Heart Association’s Circulation.

Scientists have been studying the role of brown fat for years after discovering that adult humans have this fat. It was previously believed to exist only in babies, who benefit from its warming nature. Known as “good fat,” brown fat differs from ordinary white fat in that it burns energy and generates heat via a process called thermogenesis. It’s the fat that keeps hibernating bears warm and is found in small amounts in adult humans.

In the animal study, Dr. Stanford and her colleagues found that the release of the lipokine 12,13-diHOME—either during exercise or by increasing the amount of brown fat—helps the heart. A sustained overexpression of 12,13-diHOME also negates the adverse effects of a high-fat diet on cardiac function.

Researchers then looked at whether a correlation exists between the lipokine and heart disease or cardiac function in humans, by measuring it in 75 people with and without heart disease. They discovered that both men and women with heart disease had reduced concentrations of the lipokine. Study participants were recruited by AdventHealth Orlando in Florida in collaboration with Paul Coen, PhD.

“We know that exercise improves heart function, and now we know that one of the mechanisms for this is by increasing 12,13-diHOME. If we can find a way to pharmacologically stimulate the release of 12,13-diHOME like is done during exercise, it could potentially help patients suffering from cardiovascular disease, which is the leading cause of death in the world,” Dr. Stanford says.

Because scientists conducted the research in healthy mice, the next step is to see how the lipokine functions in older animals and those with heart problems as well as to determine the safety and efficacy of 12,13-diHOME treatment.