Knowing whether a food is healthy or not often feels like a pretty simple judgment. Fruits? Yes. Candy? No. But it’s not always as clear-cut as it seems.

In fact, many foods that masquerade as healthy are just the opposite — stuffed with sugar or lacking nutrients.

So what foods are the biggest offenders and how can you be confident your healthy food isn’t junk food in disguise?

To get some answers, we enlisted the help of Lauren Blake, RD, LDN, CHWC, a registered dietitian at Ohio State Wexner Medical Center.

Just because a food is low-fat doesn’t mean it’s good for you. “Foods like peanut butter should have fat in them, and when that fat is taken out, it’s actually just being replaced with sugar,” explains Blake.

Healthy alternative: Try opting for a natural peanut butter that has mono-unsaturated fat (a good type of fat that can help lower your cholesterol) instead of trans fat (the bad type that can raise your cholesterol).

If you’re trying to eat healthy, using a low-fat or fat-free salad dressing — or no dressing at all — seems like a safe choice. “But salad dressing, like peanut butter, also has healthy fat in it,” says Blake. “Going with the regular version of the salad dressing will have fat that can help you absorb nutrients from the greens in your salad.”

Healthy alternative: Instead of skipping the dressing, try one with an olive oil base to get the most out of your salad.

Eating a vegetarian diet can be a great option for many people, but if you do go vegetarian, Blake recommends not trying to replace meat with artificial alternatives. “Fake meat products are often high in salt, which increases blood pressure. They also have processed soy, which doesn’t have any of the fat or fiber that usually makes soy healthy.”

Smoothies may seem harmless, but when you pick one up from a fast food restaurant, you’re not making as great a choice as you thought. “The fruits that go into fast food smoothies are high in sugar. Lots of simple syrup gets added to them,” says Blake.

Healthy alternative: If you’re craving a smoothie, make your own at home. That way you can control what goes in it.

Download our delicious recipe for 'blushing beet and berry smoothie'!

The granola and fruit in these parfaits, while they may seem healthy, are highly sweetened with syrup. “Overall, this snack is low in protein and high in carbohydrates and sugar. The sad truth is that pre-packaged yogurt parfaits are made for taste, not nutrition,” says Blake.

Healthy alternative: Try reaching for some fresh fruit instead of this sugar-filled snack.

Diet meals from the frozen food case may appear to be a great way to get a well-portioned dinner that won’t require lots of preparation. “What people tend to notice when they eat frozen meals, however, is that the meals aren’t very satisfying,” says Blake. “They’ll find themselves reaching for high-calorie snacks later on in the evening because they’re still hungry.”

Healthy alternative: Instead of eating a frozen meal, try prepping larger portions of healthy protein and greens that can be frozen and saved for reheating later on.

Pretzels aren’t as bad as potato chips, but they also aren’t the best choice. “The problem with pretzels is that they’re a ‘filler food’,” says Blake. “They’re mostly refined carbs and they don’t have any proteins or good fat.”

Healthy alternative: If you’re looking for a healthier snack, replace pretzels with nuts.

Here’s the big secret about fiber bars: They actually aren’t high in fiber. “With all the added sugar that goes into fiber bars, they’re really no better than a candy bar,” says Blake.

Healthy alternative: Try getting your fiber from more natural sources like beans or brown rice instead.

Why is obesity a risk factor for severe COVID-19 symptoms?

A recent report by the Centers for Disease Control and Prevention indicates that older adults and people of any age who have serious underlying medical conditions—including obesity—may be at higher risk for severe illness from COVID-19.

Partner with your pet to succeed with diet and exercise 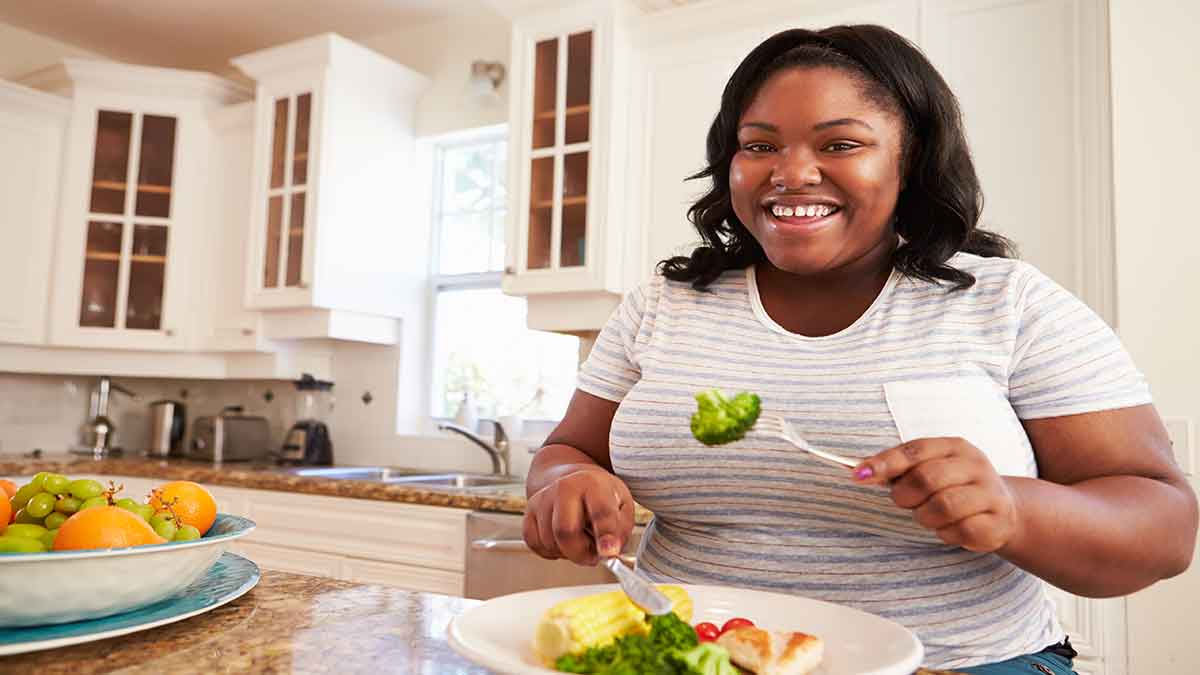 Can you be overweight but healthy?

While being overweight is a precursor to obesity and, like obesity, can increase the risk of diabetes, heart attack and stroke, it’s also possible to be overweight and still healthy, especially if you’re free from chronic diseases like hypertension or diabetes.