What’s with all the tests at the doctor’s office? 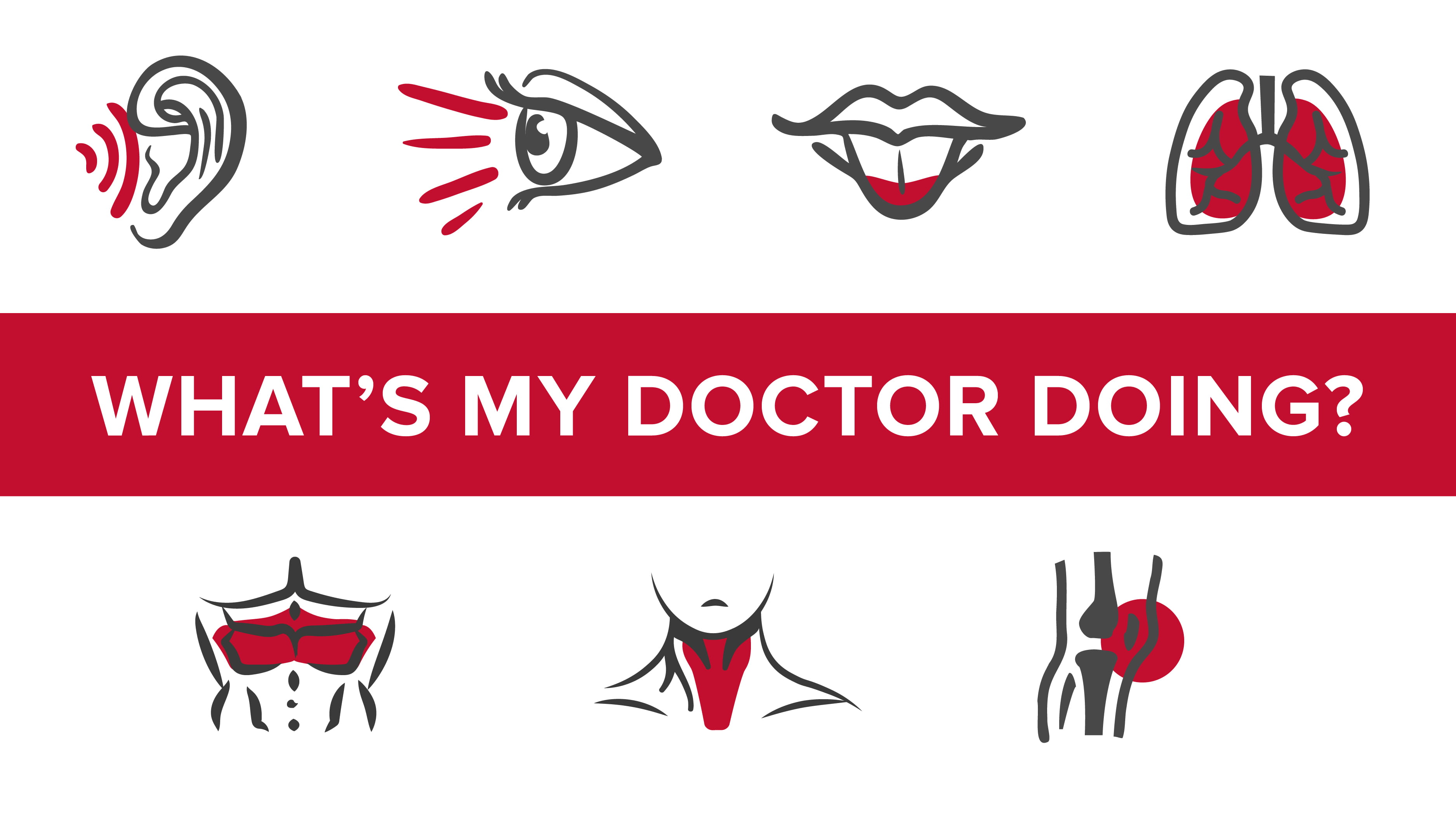 Have you ever wondered what your doctor is looking for when poking and prodding you during an exam?
Often that answer depends on why you came to see the doctor in the first place. If you’re coming for an annual physical or preventive wellness care visit, your primary care doctor will evaluate your current health status. He may look in your look in your ears, but may not expect to find anything wrong.
But if you go to see your doctor for a “problem-focused visit” with a specific complaint, such as an ear ache or sore throat, then the physician will want to take a closer look at those areas to try to determine the problem.
During the examination, the doctor is taking into consideration the entire person by asking questions, such as: What are your symptoms? How long have had these symptoms? Have you been having a fever? Are you having night sweats? Where does it hurt?
If you come in complaining of a cold, the physician will focus on your head and neck area, and won’t be looking at your toes. But if you come in complaining about foot pain, that’s where the exam will focus.
Here’s a rundown of what’s happening during an exam at your doctor’s office:
Neck
For a general complaint of not feeling well, physician will feel the patient’s neck, trying to determine if the thyroid gland or lymph nodes and lymph glands are swollen, which could indicate an underlying infection.
An enlarged thyroid gland, also known as a goiter, could indicate problems with the thyroid, including fatigue and difficulty swallowing.
A single swollen lymph node could be a sign of an infection in that particular lymph node, or it could signal a type of cancer called lymphoma. If the patient has multiple swollen lymph nodes, that could indicate a cold. 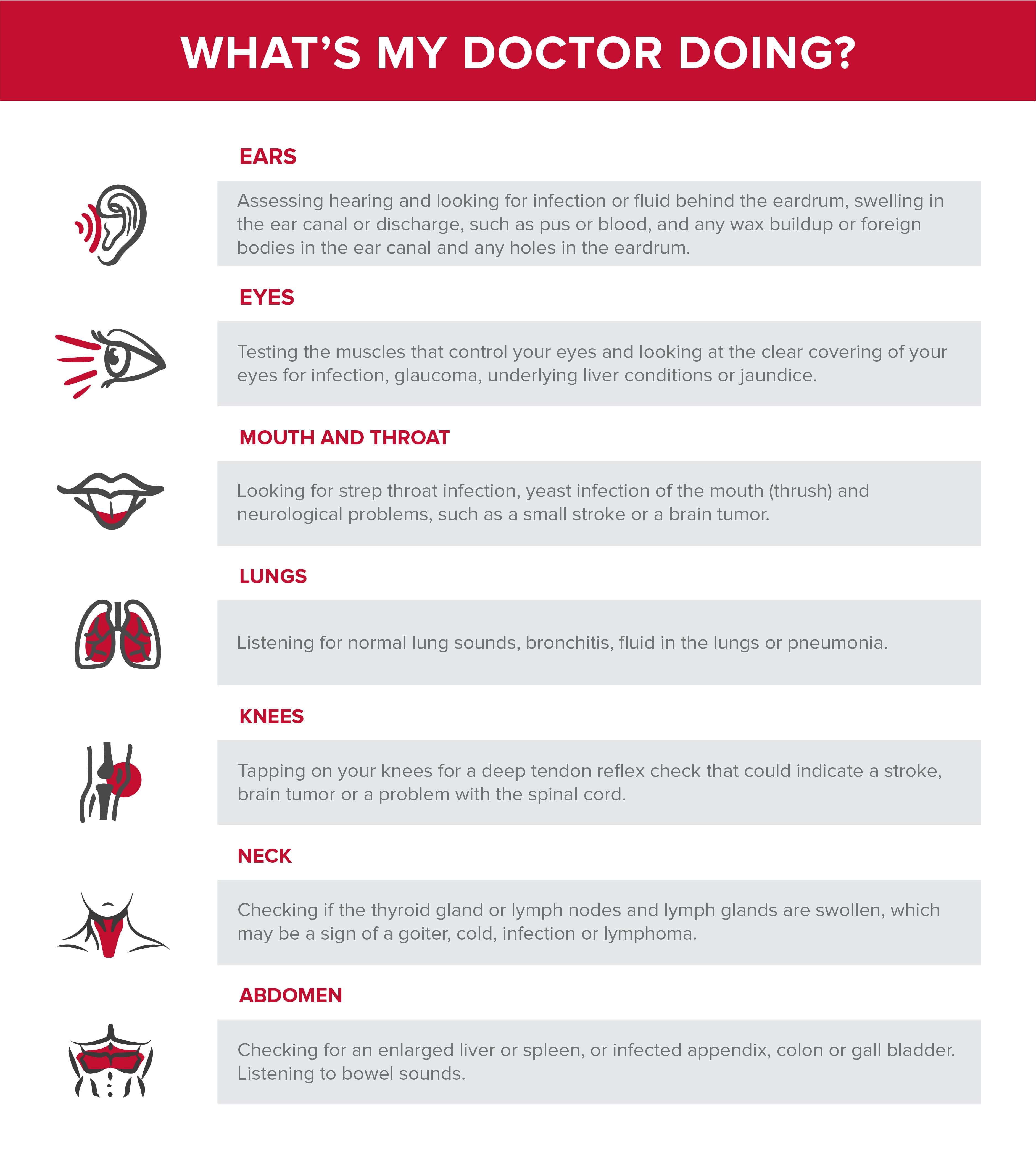 Ears
If you come in complaining of an earache, the doctor will examine the outside and inside of the ear to assess hearing and look for infection or fluid behind the ear drum. Swelling in the ear canal or discharge such as pus or blood could mean swimmer’s ear. Using a lighted magnifying tool called an otoscope, the physician will look for wax buildup or foreign bodies in the ear canal and any holes in the eardrum. Along with ear pain, dizziness may be a symptom of an ear problem.
Eyes
When you’re asked to follow your doctor’s finger with your eyes, this is testing the muscles that control your eyes. Especially in older patients, this test can provide a clue that there may be a neurological problem such as a stroke, since these cranial nerves and are connected to the muscles that control your eyes.
Your physician will also look at the clear covering of your eyes. If it’s red, that could indicate an infection or glaucoma. If the white part of your eye (sclera) is yellowing, that could mean an underlying liver condition or jaundice.
Mouth and Throat
If you have a cold or a sore throat, the physician will use a tongue depressor to look inside your mouth and at the back of your throat, especially your tonsils. If the tonsils are red, swollen or covered with white spots, or you’re having sinus drainage at the back of your throat, that could mean a strep throat infection.
Also, if your tongue has a white coating on it, that could mean you have a yeast infection of the mouth, also known as thrush. This is more commonly seen in babies and elderly patients.
If the doctor asks you to stick out your tongue to see if it’s straight or crooked, that’s an example of a cranial nerve test that can be an early indicator of possible neurological problems, such as a small stroke or a brain tumor.
Lungs
Using a stethoscope, the doctor will listen for normal lung sounds while the patient breathes deeply and normally. Wheezing sounds could indicate bronchitis or fluid in the lungs or pneumonia.
Knees
When the physician taps on your knees for a deep tendon reflex check, this is actually part of the neurological examination that could indicate a stroke, brain tumor or a problem with the spinal cord. The reflex should be equal, symmetrical and appropriate, not hyper or diminished.
Abdomen
For complaints of abdominal pain, the doctor will press on the patient’s stomach, looking for areas of tenderness, and may ask the patient to point to the area of pain. which could indicate an enlarged liver or spleen.
Something to keep in mind is that it can be more challenging for your doctor to get a good sense of enlarged organs by pressing on your belly if you’re obese.
Tenderness in the abdomen could indicate a variety of ailments, depending on where it’s located and whether it’s a male or female patient. Tenderness could be a sign of an infected appendix, colon or gall bladder or appendix. And in women, this could be sign of an enlarged ovary.
The doctor may also use a stethoscope to listen to bowel sounds. Are they present? Are they normal? An absence of bowel sounds could mean there’s an obstruction or another problem with the intestines.
An additional test may be performed on men who are complaining of abdominal pain, swelling in the lower abdomen, scrotal pain or change in bowel movements. During the exam, male patients are asked to turn and cough while the doctor presses on the lower part of the abdomen. This allows the physician to determine if they have a specific type of hernia that occurs when a weakness in the abdominal wall allows the intestines to slide toward the scrotum. (The patient is asked to turn his head as a common courtesy so as not to cough on the doctor.)
Aaron Clark is an associate professor at The Ohio State University College of Medicine and associate chair in the Department of Family Medicine at Ohio State’s Wexner Medical Center.