Downloads
COLUMBUS, Ohio – For the first time, researchers have evidence that fibromyalgia can be reliably detected in blood samples – work they hope will pave the way for a simple, fast diagnosis.
In a study that appears in the Journal of Biological Chemistry, researchers from The Ohio State University report success in identifying biomarkers of fibromyalgia and differentiating it from a handful of other related diseases.
The discovery could be an important turning point in care of patients with a disease that is frequently misdiagnosed or undiagnosed, leaving them without proper care and advice on managing their chronic pain and fatigue, said lead researcher Kevin Hackshaw, an associate professor in Ohio State’s College of Medicine and a rheumatologist at The Ohio State University Wexner Medical Center.
Identification of biomarkers of the disease – a “metabolic fingerprint” like that discovered in the new study – could also open up the possibility of targeted treatments, he said. 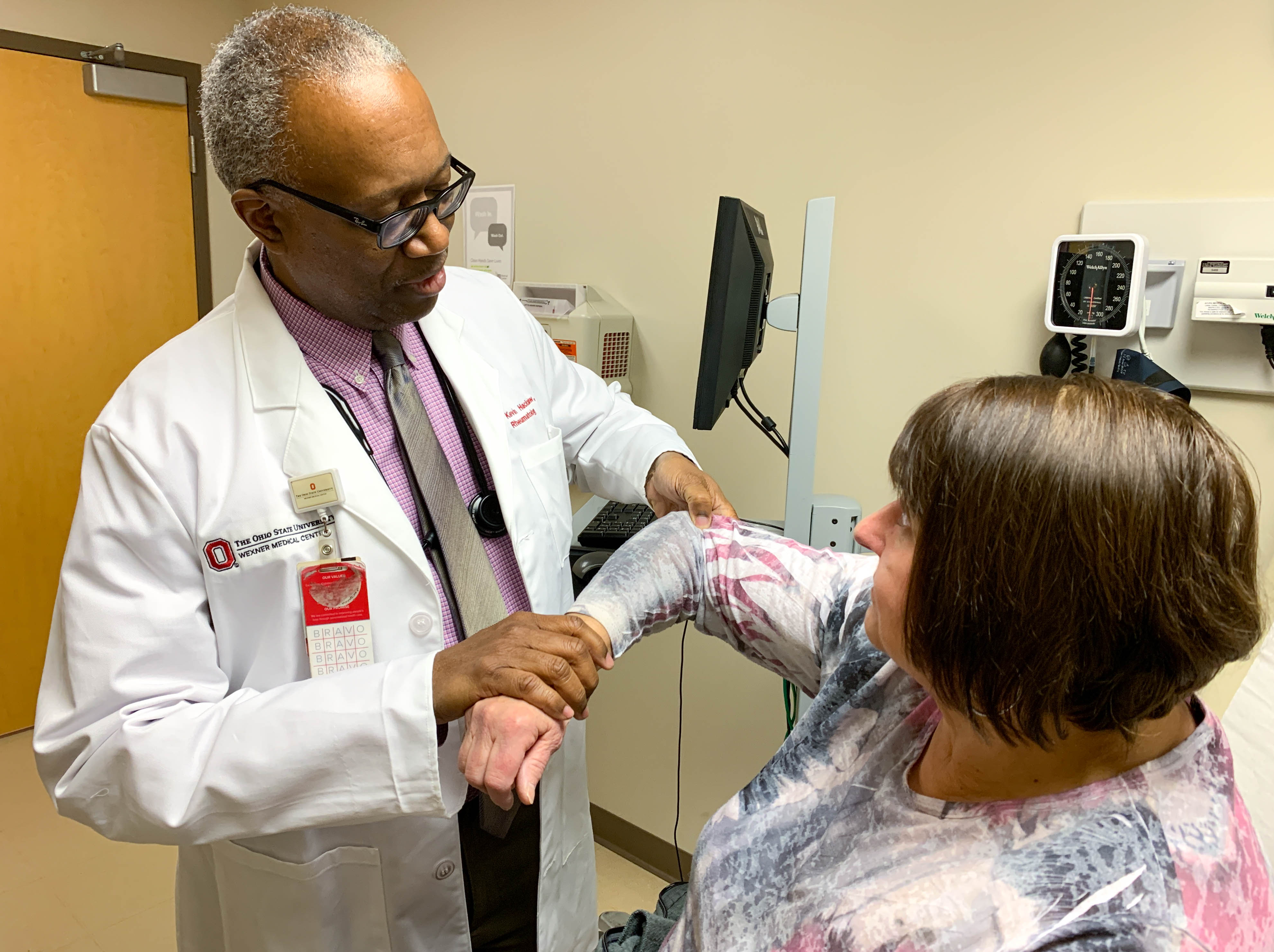 To diagnose fibromyalgia, doctors now rely on patient-reported information about a multitude of symptoms and a physical evaluation of a patient’s pain, focusing on specific tender points, he said. But there’s no blood test – no clear-cut, easy-to-use tool to provide a quick answer.
“We found clear, reproducible metabolic patterns in the blood of dozens of patients with fibromyalgia. This brings us much closer to a blood test than we have ever been,” Hackshaw said.
Though fibromyalgia is currently incurable and treatment is limited to exercise, education and antidepressants, an accurate diagnosis has many benefits, Hackshaw said. Those include ruling out other diseases, confirming for patients that their symptoms are real and not imagined, and guiding doctors toward disease recognition and appropriate treatment.
“Most physicians nowadays don’t question whether fibromyalgia is real, but there are still skeptics out there,” Hackshaw said.
And many undiagnosed patients are prescribed opioids – strong, addictive painkillers that have not been shown to benefit people with the disease, he said.
“When you look at chronic pain clinics, about 40 percent of patients on opioids meet the diagnostic criteria for fibromyalgia. Fibromyalgia often gets worse, and certainly doesn’t get better, with opioids.”
Hackshaw and co-author Luis Rodriguez-Saona, an expert in the advanced testing method used in the study, said the next step is a larger-scale clinical trial to determine if the success they saw in this research can be replicated.
The current study included 50 people with a fibromyalgia diagnosis, 29 with rheumatoid arthritis, 19 who have osteoarthritis and 23 with lupus.

Researchers examined blood samples from each participant using a technique called vibrational spectroscopy, which measures the energy level of molecules within the sample. Scientists in Rodriguez-Saona’s lab detected clear patterns that consistently set fibromyalgia patients’ blood sample results apart from those with other, similar disorders.
First, the researchers analyzed blood samples from participants whose disease status they knew, so they could develop a baseline pattern for each diagnosis. Then, using two types of spectroscopy, they evaluated the rest of the samples blindly, without knowing the participants’ diagnoses, and accurately clustered every study participant into the appropriate disease category based on a molecular signature.
“These initial results are remarkable. If we can help speed diagnosis for these patients, their treatment will be better and they’ll likely have better outlooks. There’s nothing worse than being in a gray area where you don’t know what disease you have,” Rodriguez-Saona said.
His lab mostly concerns itself with using the metabolic fingerprinting technology for food-related research, focusing on issues such as adulteration of milk and cooking oils and helping agriculture companies figure out which plants are best suited to fight disease.
The chance to partner with medical experts to help solve the problem of fibromyalgia misdiagnosis was exciting, said Rodriguez-Saona, a professor of food science and technology at Ohio State.
“This cross-collaboration of physicians and scientists in two disparate disciplines at Ohio State exemplifies the research innovations that lead to new therapies for patients who struggle to manage the chronic pain and fatigue that are the hallmarks of this debilitating disease,” said Dr. K. Craig Kent, dean of the College of Medicine.
Rodriguez-Saona said for the next study he’d like to examine 150 to 200 subjects per disease group to see if the findings of this research are replicable in a larger, more-diverse population.
Hackshaw said his goal is to have a test ready for widespread use within five years.
Fibromyalgia is the most common cause of chronic widespread pain in the United States, and disproportionately affects women. The U.S. Centers for Disease Control and Prevention estimates that about 2 percent of the population – around 4 million adults – has fibromyalgia. Other organizations estimate even higher numbers.
About three in four people with fibromyalgia have not received an accurate diagnosis, according to previous research, and those who do know they have the disease waited an average of five years between symptom onset and diagnosis. Common symptoms include pain and stiffness all over the body, fatigue, depression, anxiety, sleep problems, headaches and problems with thinking, memory and concentration.
Eventually, this work could lead to identification of a particular protein or acid – or combination of molecules – that’s linked to fibromyalgia, Rodriguez-Saona said.
“We can look back into some of these fingerprints and potentially identify some of the chemicals associated with the differences we are seeing,” he said.
In addition to identifying fibromyalgia, the researchers also found evidence that the metabolic fingerprinting technique has the potential to determine the severity of fibromyalgia in an individual patient.
“This could lead to better, more directed treatment for patients,” Hackshaw said.
Other Ohio State researchers involved with the study were Didem Aykas, Gregory Sigurdson, Marcal Plans Pujolras, Francesca Madiai, Lianbo Yu and Monica Giusti. Tony Buffington, formerly of Ohio State and now at the University of California, Davis, was also a co-author.
The Columbus Medical Research Foundation helped support this research.
###
Media Contact: Eileen Scahill, 614-293-3737, Eileen.Scahill@osumc.edu
Written by Misti Crane, 614-292-5220; Crane.11@osu.edu