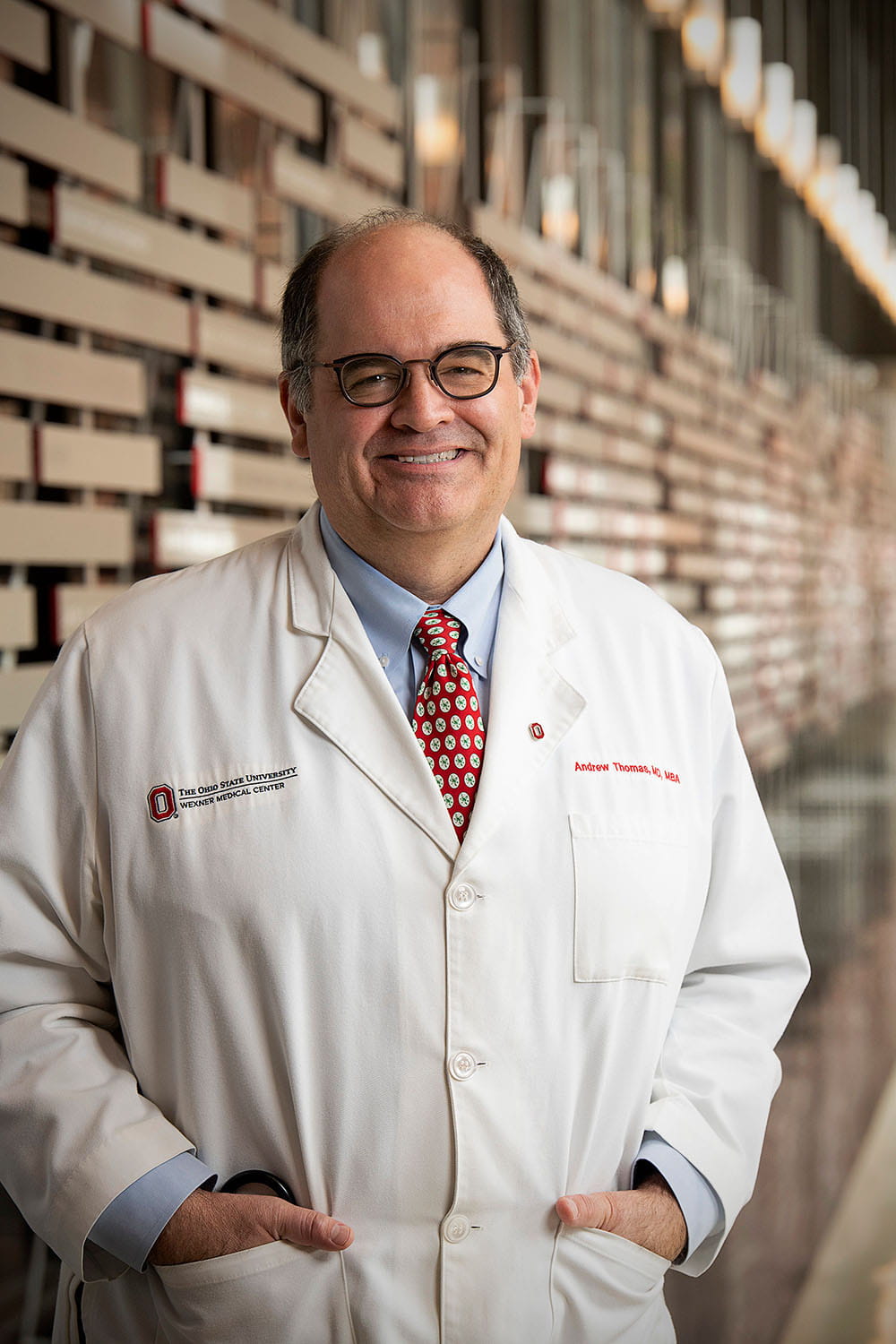 Over the last 15 years, Thomas has served in a variety of leadership roles within the Medical Center including medical director of Ohio State’s University Hospital and associate dean for graduate medical education for the College of Medicine.

“Andy is among a small handful of highly qualified and respected leaders in the country with both extensive medical and administrative experience,” said Gabbe. “In today’s dynamic health care environment, Andy’s unique skill set will advance Ohio State’s efforts  to create a national model for the delivery of high-quality and cost-effective health care.”

During his career at Ohio State, Thomas has been a major contributor to many initiatives which have brought national recognition to the Medial Center. He has been very involved with Ohio State’s implementation of its integrated electronic medical records system as well as programs to enhance quality, patient safety and satisfaction. In addition, he continues to practice internal medicine in the OSU Executive Health program.

“Andy is a very influential leader and knows the value of collaboration and consensus to effect change,” said Peter Geier, CEO of Ohio State’s Health System. “Teamwork is important in every industry, but health care has its own set of challenges and as we prepare to open one of the country’s largest hospital expansion projects later next year, Andy’s guidance will play a significant role in our success,” said Geier.

Thomas served as president of the Columbus Medical Association in 2007-2008 and is currently a member of the Ohio State Medical Association Council, representing the physicians in nine counties in central Ohio. He has also been a leader in the development of the Ohio Hospital Association’s Central Ohio Quality Collaborative for the past ten years. He is a former recipient of the Columbus Business First Forty Under 40 award, and is currently a member of the Board of Trustees for The Wellington School in Upper Arlington.

At the national level, he is a member of the Chief Medical Officers Group Steering Committee for the Association of American Medical Colleges and a member of the Clinical Learning Environment Review Committee of the Accreditation Council for Graduate Medical Education (ACGME). Previously, he has served as vice chair of the Institutional Review Committee for the ACGME and as the resident trustee on the American Medical Association Board of Trustees.

Thomas replaces Dr. Hagop Mekhjian who served as Wexner Medical Center’s first chief medical officer since 2001. In addition, he also served as medical director of University Hospital for 22 years. Mekhjian will continue to teach and practice at Ohio State.

A native of Louisville, Ohio, Thomas received his bachelor’s degree from Harvard University prior to entering medical school at Ohio State in 1991. He completed his internal medicine residency at Ohio State, and then completed a master’s degree in business administration from Ohio State’s Fisher College of Business. Thomas and his wife, Lisa Wilkins Doran, live in Brown Township with their three children.