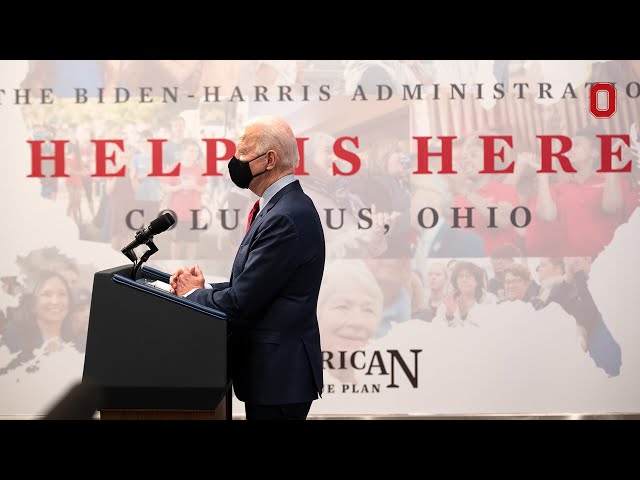 In the hours leading up to a visit from the 46th president of the United States, The Ohio State University Wexner Medical Center hummed along as usual.

Even at the focus of President Joe Biden’s tour — inside the Department of Radiation Oncology on the second floor of The Ohio State University Comprehensive Cancer Center – Arthur G. James Cancer Hospital and Richard J. Solove Research Institute — there was quiet. Calm. An air of people playing it cool.

But everyone knew. Even the patients were asking.

Tuesday, though, was far from a normal day at the Ohio State Wexner Medical Center. Air Force One flew overhead. A motorcade escorted Biden to Ohio State's Comprehensive Cancer Center – James Cancer Hospital and Solove Research Institute. For the world to hear, Biden called the OSUCCC – James “a source of hope.” President Joe Biden, speaking to a small group of dignitaries, university leaders and local and national press gathered at the James Cancer Hospital.

Biden’s visit, timed to the 11-year anniversary of the signing of the Affordable Care Act, marked his first trip to Ohio since he became president.

His tour of the Department of Radiation Oncology was deliberate: the ACA had helped build the second floor of the OSUCCC – James. In 2010, Ohio State was named the recipient of a competitive new ACA grant, and the $100 million award funded the spacious, airy floor where cancer patients receive advanced personalized radiation therapy.

Dr. Arnab Chakravarti, chair of the Department of Radiation Oncology, escorted Biden through the department Tuesday to share the advancements the ACA funding made possible, including expanding treatment from 70 to 300 patients a day. He shared some personal conversation with Biden, who lost his son Beau to brain cancer and has repeatedly stated his mission to “end cancer as we know it.” For some Ohio State Wexner Medical Center employees, President Biden’s visit was up close and personal. Tameka Hairston, manager of the case management and social work department at East Hospital, speaks about the impact of the Affordable Care Act and introduces Biden. Dr. Arnab Chakravarti, chair of the Department of Radiation Oncology, discusses advances in cancer treatments with President Biden at the OSUCCC – James.

What's it like to introduce the president of the United States? Read Tameka Hairston's story.

“It meant everything,” Chakravarti said of Biden’s visit. “For him to come to Ohio State and to the Department of Radiation Oncology to celebrate that monumental event was very, very meaningful — not just for faculty and staff but for our patient population as well. I heard from our patients who just were touched that he would go that extra mile.”

During his speech from the OSUCCC – James Tuesday, Biden noted the accomplishments of the ACA and also touted the health care components of his coronavirus relief package. Among other measures, the American Rescue Plan, which Biden signed into law on March 11, lowers premiums for most consumers who buy insurance through the federal marketplace and expands access to financial assistance for more consumers. It aims to build on the success of the ACA, which led to a 60% decrease in uninsured patients at Ohio State since 2014 and gave college students and patients with pre-existing conditions improved access to better care.

This was the first time a sitting U.S. president had visited the Ohio State Wexner Medical Center. “There’s nothing we can’t do when we come together — and, I would add, come together as Buckeyes. This is a momentous day… a great day for Ohio and The Ohio State University.” Tuesday’s stop added to Biden’s Columbus visits, which include his 2016 appearance at a memorial tribute to the late astronaut and longtime U.S. Sen. John Glenn, and his 2017 speech at the opening ceremony for Pelotonia, the yearly cycling event that raises money for cancer research at the OSUCCC – James. In 2018, Biden swung through Sloopy’s Diner in the Ohio Union on a campaign stop with then-gubernatorial candidate Richard Cordray and enjoyed one of Sloopy’s famous milkshakes.

But this was Biden’s first appearance at Ohio State as president — and it was the first time a sitting U.S. president had ever visited the Ohio State Wexner Medical Center. For Dr. Hal Paz, executive vice president and chancellor for health affairs at The Ohio State University and CEO of the Ohio State Wexner Medical Center, the visit felt like soaring affirmation for the medical center’s hard work and innovation, especially during the pandemic, which has seen Ohio State at the forefront of the treatment and prevention of COVID-19.

“I think everyone was aware of the increased level of national attention that we’ve received for this extraordinary work that 30,000 people, as part of this great university, have been able to accomplish.” Paz said. “But when the president of the United States decides to come here, it just puts it in a whole different context.” “We were thrilled to welcome President Biden to the OSUCCC – James. His visit shines a light on the incredibly important work we’re doing right here on campus,” said Dr. William Farrar, CEO of the OSUCCC – James. “The unique care we provide at The James is innovative, patient-centered and has propelled us to be one of the leading cancer hospitals in the nation. I am grateful the president recognized the incredible teams across our cancer program, the Wexner Medical Center and Ohio State. It was certainly an exciting day for us all.”