As COVID-19 rages, Dr. Michael Dick won’t let anything stop him from working – not even cancer 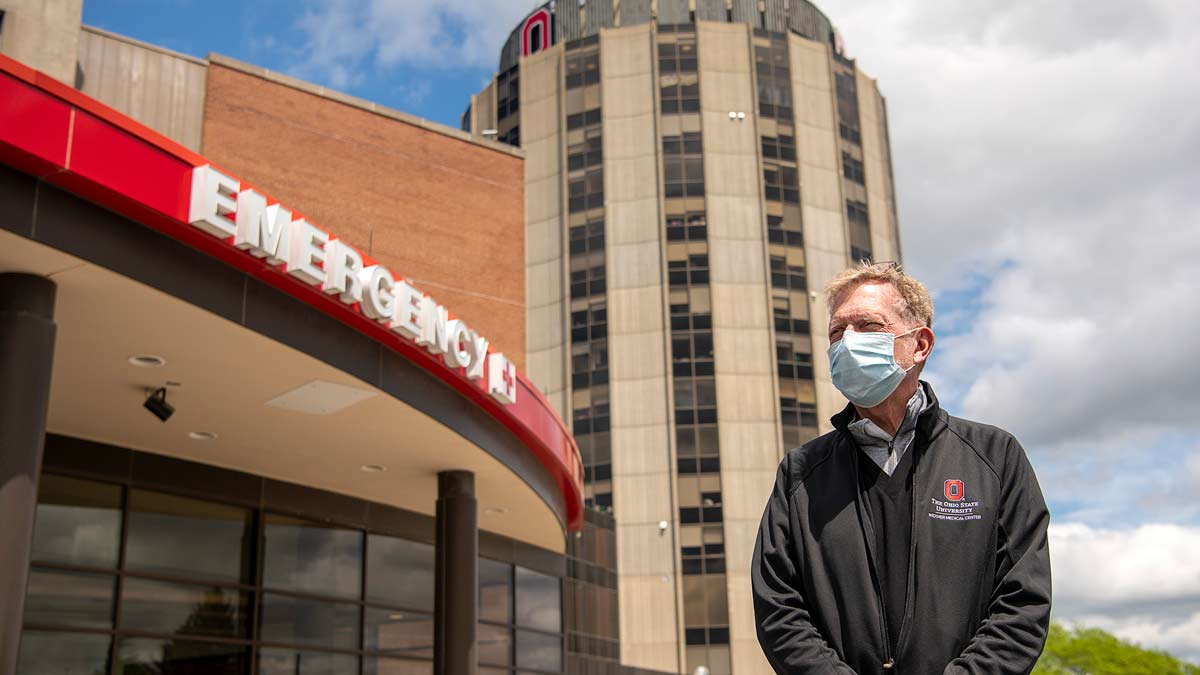 The doctor becomes a patient

There’s little Michael Dick, MD, hasn’t seen in 27 years in the Emergency Department at The Ohio State University Wexner Medical Center. Dr. Dick is medical director of Emergency Medicine at Ohio State East Hospital and professor of Emergency Medicine. His is a physically and emotionally demanding job. But he doesn’t get a reprieve when he takes off his scrubs. He isn’t just fighting on the front lines of COVID-19, he’s also fighting cancer.

Like most Americans, 2020 tested Dr. Dick’s body and psyche. But his battle has been different than most. In the waning months of 2019, he started to feel pain in his neck and shoulders. Reluctant to get it checked out, it soon became impossible to ignore. An X-ray of his thoracic spine—a stack of 12 tightly pressed bones in the spinal column—revealed a tumor in his lung. A subsequent CT scan revealed another in his liver. The tumors had irritated the nerves in his thoracic spine and all the pain had dumped onto his shoulders and neck. His doctors concluded that the tumors were inoperable.

Dr. Dick has been the medical director of the Emergency Department at East Hospital on the Near East Side of Columbus since 1999. That same year, Ohio State purchased the nearly defunct facility, then known as Park Hospital, and named it University Hospital East. Renamed East Hospital in 2018, it has been described as having a community hospital feel due to its friendly culture of long-term employees and its convenient, neighborhood-based location.

Dr. Dick enjoys that family feel. “I’m grateful that Ohio State invested in East Hospital. It’s a special place to work. I’ve been so fortunate to work with such a wonderful group of physicians, nurses, staff and administrators. In some ways, it has become a stepping stone for many of our top medical center leaders. I do hope they never forget where they came from,” he says.

East Hospital sits squarely between the affluent suburb of Bexley and a host of low-income neighborhoods closer to downtown. One minute Dr. Dick might be taking care of a patient who could pay their hospital bill in cash, the next he might be saving someone’s life who doesn’t have health insurance. His approach, though, remains consistent. Dr. Dick prefers not to call himself a doctor when he introduces himself to his patients. He would rather they know him by his name than by his title.

“I’ve always felt that every person, whether they’re a CEO or someone on Medicaid, deserves the same quality of care,” Dr. Dick says. “And because of where we’re located, we have the opportunity to provide that care for people who are really, really in need.”

When asked why he wanted to become a doctor in the first place, Dr. Dick scratches the greying red stubble on his chin and lets his gaze wander. The sleeves of his sweater cross, and he lets out a deep breath before he finally speaks. “I guess it’s something that’s been there for a very long time,” he says.

He thinks about his grandmother, Mildred, who developed a blood disease that claimed both of her legs when she was 20. “Milly,” to her friends, was outfitted with prosthetics that seemed crude by today’s standards. Regardless, she was the only one of her three sisters who learned how to drive. On the weekends, she’d pick them up, her prosthetic feet deftly navigating the three pedals on the floorboard, and they’d head into town to meet friends and dance away the night.

And he thinks about his brother, Dan, who was born premature. Dr. Dick was only five at the time, but remembers sitting at his brother’s bedside in the hospital as the days grew into weeks. He got to know the medical staff, and he marveled at how they made the heroic look routine. Dan’s condition improved slowly, and the Dick family took him home to Shelby after six months. By then, Dr. Dick knew what he wanted to do when he grew up.

Throughout his life, his parents provided constant support and encouragement. It was never a question that he would go to college, though he was the first in his family to do so.

Decades ago, when Dr. Dick and his classmates rotated through the pediatric unit during clinicals, a friend and fellow future doctor made clear his motives for being there in the first place. His dad was a surgeon, and he was disinterested in becoming a pediatrician because they didn’t make as much money as other kinds of doctors. When he heard this, Dr. Dick’s mind drifted to his own middle-class upbringing in Shelby and to his dad, a railroad worker.

“That just flabbergasted me,” Dr. Dick says. “I thought, ‘Wait, you’re choosing what you’re going to do based on salary?’ That seemed very odd to me.”

The East Hospital Emergency Department has been defined during Dr. Dick’s tenure by constant change. In 1999, annual visits to the ED were a modest 13,000 a year. For the last several years, more than 50,000 people a year are seen there.

“The East Hospital ED, with support from other departments, has developed a program for the care of patients with acute heart attacks and strokes. We are now a Level III Trauma Center. Our ED leads the central Ohio region in providing state-of-the-art care to patients with drug addiction. I see the East ED as the unusual blend of public health and outreach, while treating minor problems one minute and cardiac arrests and gunshot wounds the next. All of these programs have been established and maintained independent of the full complement of resources available at University Hospital,” he says.

The impact of the coronavirus on the ED has been variable. “At the beginning, we prepared for an onslaught. But, it didn’t really materialize. In fact, ED volumes at East Hospital—and across the nation—decreased dramatically. Eventually we saw more and more COVID-19 patients.”

“Nonetheless, it has been quite an adaptation for our physicians and staff. Continually doffing and donning PPE, and ever-changing protocols as we learned more. We stayed on the cutting edge, working with others in the medical center to be among the first in the nation to provide therapies such as the monoclonal antibodies. The volume of patients coming to the ED is now on a steady increase back toward pre-pandemic levels,” Dr. Dick says.

Through the pandemic, his cancer fight continues. Dr. Dick has undergone biopsies, months of IV chemotherapy and 25 sessions of cutting-edge proton beam radiation therapy. He followed that up with an oral chemotherapy, more biopsies and more radiation.

“The most difficult thing for me was that at the height of the pandemic, I was in the middle of treatment and no one thought I should be exposed to the coronavirus or other potential infections. That was very hard to ask my colleagues to be on the front lines, while I mostly helped coordinate our response. I’m so proud of all of them,” he says.

His treatments aim to slow the spread of the cancerous masses. But Dr. Dick is hesitant to look too far into the future.

“I’m likely not going to see the grandkids graduate from high school, and coming to that realization is hard,” he says. “So there’s COVID-19, there’s resetting priorities, there’s trying to simplify your life—and it’s all happening at the same time. It all gets a little overwhelming at times.”

He admits that some days he’d rather be lying on a beach somewhere, but he can’t bring himself to leave the place he’s worked for more than 20 years.

“What I do is such an integral part of who I am,” he says. “Besides, what would I do, sit in the house and feel sorry for myself? I don’t think so.”

When he’s at work, he can’t help but look at his patients differently now, especially those battling cancer. They’re unaware, of course, that he does know what it’s like to walk around in their shoes, to be in the bed instead of beside it. Compassion has always been his guiding ethic, but the feeling is deeper now, more pronounced, more profound.

“I see so many cancer patients who are having a harder time than I am, and I think about how fortunate I am,” Dr. Dick says. “More than once I’ve said to a colleague, ‘This person wants to go home, and we are going to get them home.’”

His oldest daughter and only son live in Utah, and his youngest daughter lives near the coast in South Carolina. There’s so much he wants to do with his family, but widespread closures due to COVID-19 have limited their options. He’s been hosting family Zoom calls to update them about his condition.

Soni Shellman, the woman he has dated long-term—also an emergency medicine doctor—has been a constant light. He credits her as the source for much of his strength. “There are times when I get down, and she’s right there,” he says. “And then there are days when she’s a little upset, and I can lift her up.”

He admits that sometimes their bad days overlap. When they do, he thinks about his grandmother, her two prosthetic legs and her relentless positivity. Then he thinks about how he can’t afford to waste a day.

“Maybe it’s a gift, in some sense, because it makes you live more for now than for the future,” he says.

It used to be easier for him to look forward to retirement. He jokes about wanting to raise a herd of goats on 20 acres. But his priorities are different now, and he no longer looks at his hobby farm as something to be chased.

“Will your pension be bigger in four years? Yes. But put yourself in my shoes, where that time is no longer a given,” he continues. “Then think about what you want to do with it.”

Normally one to err on the side of frugality, Drs. Dick and Shellman bought an Airstream trailer and a new truck last summer. They have plans to visit the family in Utah and South Carolina. And then the Airstream’s aluminum body will finally catch some sunlight and its tires will find the highway.

Author note: Justin Thompson is a May 2021 graduate of Ohio University 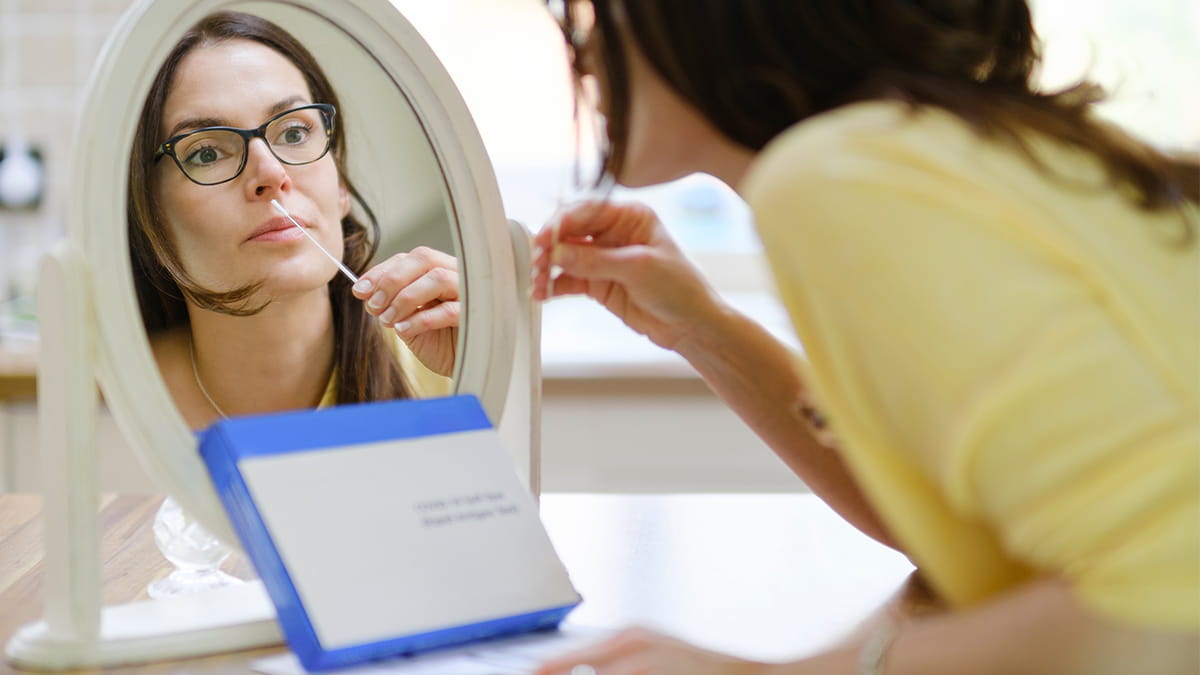 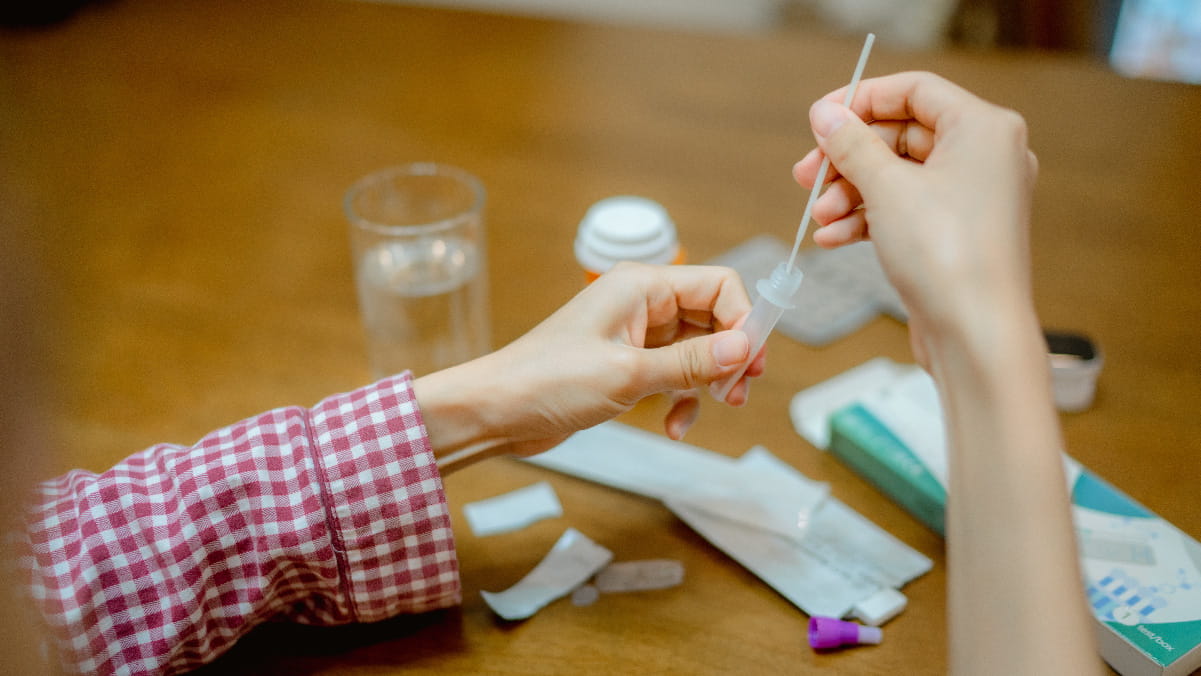