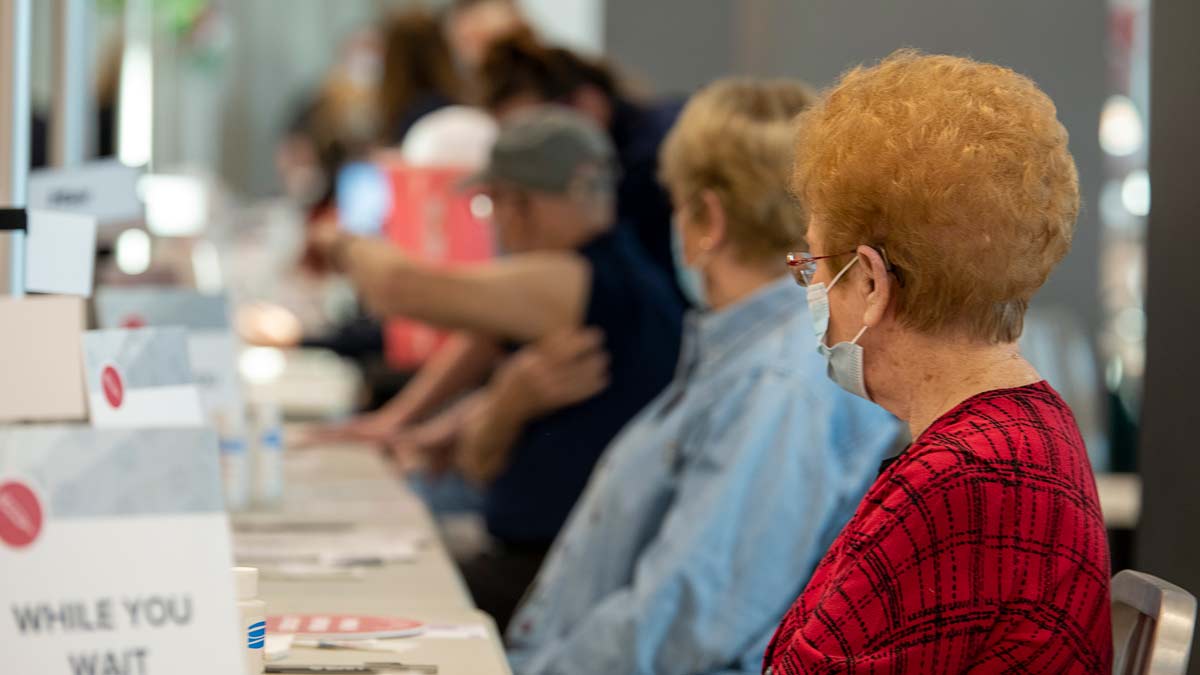 'It's an exciting day'

It was still dark when David Brehm wheeled his mother into the Jerome Schottenstein Center. To her, it felt like the middle of the night. But Helen Formet was wide awake. She was ready. She’d dressed in scarlet, an Ohio State scarf draped around her neck, the university’s Block O logo winding around her walking cane. She wore lipstick under her face mask.

“Smile, Mom!” Brehm shouted over the cameras and microphones.

“I am!” Formet called back.

In fact, she would have leapt for joy if she could. On Jan. 19, just after 7 a.m., 100-year-old Formet became the first member of the public vaccinated at The Ohio State University Wexner Medical Center's mass COVID-19 vaccination site, kicking off a distribution plan that starts with first-round vaccines for those who are 80 and older and rolls out to younger ages in the coming weeks.

“I didn’t know I was going to get all this attention,” said Formet, a former longtime Ohio State employee and one-time administrative assistant to famed surgeon Dr. Robert Zollinger. “I feel like a movie star.”

One step closer to normal

But if ever there was a day worth documenting, this was it. About 1,700 people streamed into the Schottenstein Center to take that first step back to normal after nearly a year of worry. They rolled back their sleeves and dreamed about their futures. Some posed jubilantly beside a masked-up Brutus Buckeye statue.

John Varanese, the second of 84-year-old Barbara Varanese’s 10 children, recorded his mother getting her shot and immediately shared the image with family around the world.

“We’re all so excited, everyone’s just crying and so happy.”

Margo Dunn, 78, waited on the sidelines Tuesday as her 82-year-old husband received his shot and sat for the required 15 minutes so he could be monitored for any adverse reactions. Dunn was impressed by how smoothly everything was going. People were checking in and waiting in short lines before being ushered to stations, where they received their first shots and booked their follow-up appointments. “It’s amazing,” Dunn said. She’d been concerned after seeing news reports of long lines in other states.

“I should have known it was organized, because it’s [Ohio State]," Dunn said. "If they can’t organize something—the way they organize people for the games, getting in and out—then nobody can.”

“I’ve talked to so many of my own patients over the past week, and they’re just thrilled. In many cases, it’s the first time they’ve been out of their house to do anything meaningful in weeks—if not months. This is one step closer to normal for our community,” said Andrew Thomas, MD, chief clinical officer for the Ohio State Wexner Medical Center.

“Each day, we’re going to be one step closer to having those who are most at risk be protected."

For Formet, who lives on her own in Dublin, normal will look like hugging her sons and going back to church and resuming her cherished bridge games. She knows that’s not happening right away. As medical experts recommend, she’ll continue to wear her face mask and socially distance, even after her second vaccine in a few weeks.

But this day meant something. This was no regular shot. She joked about it—“gee, I didn’t even scream or cry”—but when it was over, the people around her applauded. She spoke of the privilege and honor of receiving such a vaccine. And she talked about her 101st birthday, only a few months away. “I’m so excited I could jump up and down. If I was a little younger, I would.” 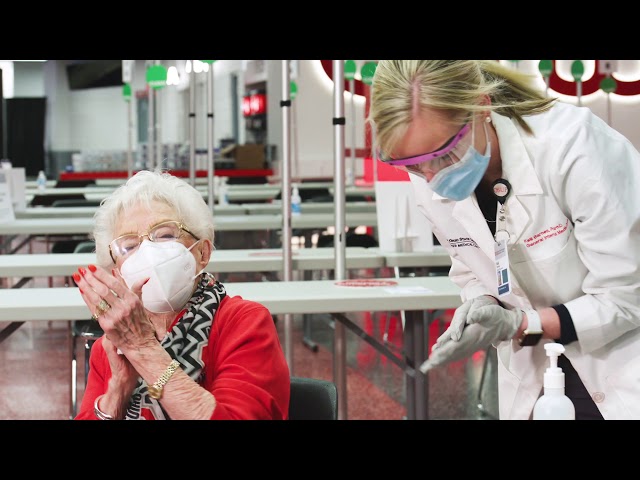 On Jan. 19, nearly 1,700 people turned out for the first day of public vaccinations at The Ohio State University’s Jerome Schottenstein Center. Many were seniors over the age of 80 eager to get back to the things they love.