The Finish Line for a Cancer Journey

Jay started having colonoscopies every five years, beginning at the age of 35, after his father died of cancer.

In 2013, Jay was diagnosed with stage 3B colon cancer and underwent surgery and chemotherapy. When his cancer recurred a few years later, a Pelotonia-funded clinical trial was just getting underway — an immunotherapy study that saved his life.

“I was able to participate in an immunotherapy trial called Pembro,” he recalls. Still relatively in its infancy at the time, immunotherapy had a marked impact on Jay’s treatment and recovery.

In fact, he was astonished at how differently he felt on immunotherapy compared to chemotherapy.

“The difference was incredible,” Jay says. 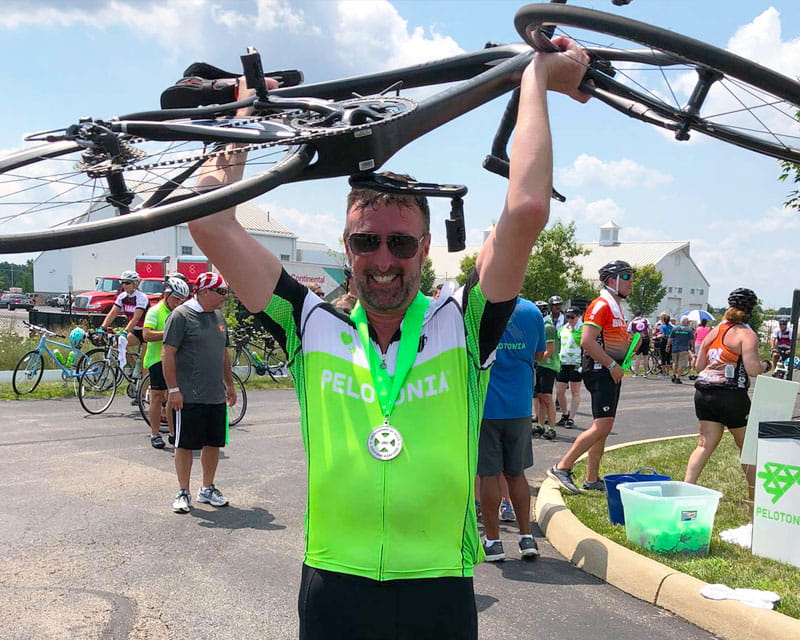 “On chemo, I had fatigue, no appetite, neuropathy, I slept a lot and had an extreme sensitivity to cold. But with immunotherapy, it really was just business as usual — I felt fantastic. I could golf, ride my bike, do any activity I normally would do and be active throughout treatment. I had no major side effects at all. It was like night and day.”

According to Zihai Li, MD, PhD, founding director of the Pelotonia Institute for Immuno-Oncology, the immune system “can remember things that happened in the past. Once it’s trained to deal with a particular type of cancer (using immunotherapy), there is a high likelihood that the cancer will not relapse.”

“I think I dodged a bullet. I think it was all about timing... I got to watch two of my daughters graduate from Ohio State, and my youngest is a senior at Ohio State,” says Jay.