Johnny Barba’s path to medicine began with what he calls his “bone-crushing victory” – his recovery from a major injury to his tailbone that he suffered during a basketball game in seventh grade.

The injury left him in a wheelchair with torn muscles in his hips. Two screws were required to correct broken bones in his pelvis.

He feared right away that he wouldn’t be able to pursue his first career choice.

Construction work appealed to Johnny growing up in the small Ohio village of Byesville, located about an hour west of the Ohio/West Virginia border, because “I thought it was the best way to help the most amount of people.”

His recovery from the injury was his introduction to medicine, where his dream to help people is his motivating factor. Thanks to an anonymous scholarship donor, his opportunity to realize that dream is closer.

Johnny received a $25,000 scholarship during his first year at Ohio State – money he says is especially helpful given that his father passed away before he was born and his mother has suffered from neurological illnesses. But the money isn’t what most touched him about the gift.

Because of the generosity of this scholarship donor, Johnny will be able to pursue what truly matters to him.

“Do small things with great love – that’s my favorite quote from Mother Teresa. The best small thing you can do, to me, is to put a smile on somebody’s face.” 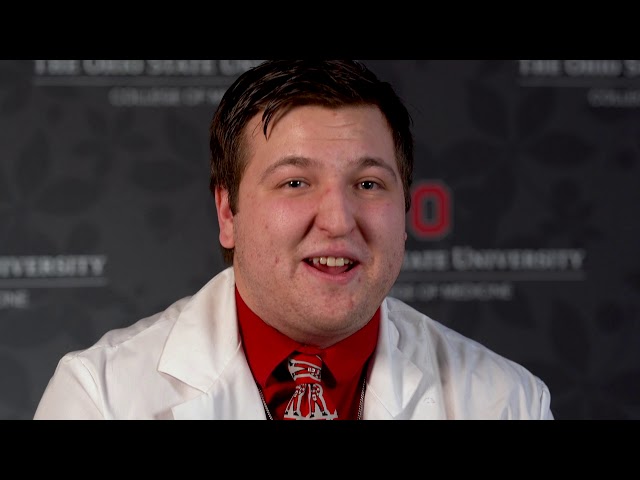 Johnny thought he was recording a general thank you to Ohio State College of Medicine donors. Instead, he receives surprise news.