The Stefanie Spielman Fund has reached a major fundraising milestone that spotlights its progression from grassroots origins to major community force. 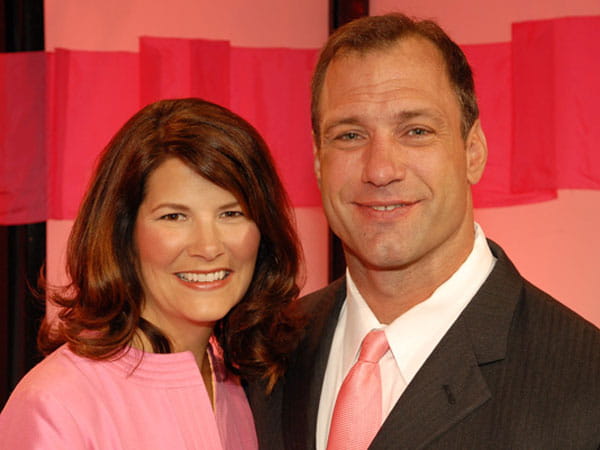 To Chris Spielman, raising $25 million to end breast cancer reflects how Stefanie’s legacy is inspiring the thousands of people working on the fund’s behalf today.

“I am proud the fund has been able to continue to grow even after Stefanie passed away,” says Spielman. “I think people know the fund was created out of a love for others and Stef’s service to others.”

Rather than focus on the diagnosis, Stefanie, a mother of four, and her husband Chris, an NFL football star who had been an All-American linebacker during his days at Ohio State, set out to raise money for breast cancer research at the OSUCCC – James.

So began the Stefanie Spielman Fund in 1998, a cause Stefanie believed to be her life’s mission.

Their first year they raised more than $1 million, quadrupling their goal, and brought awareness to the need for breast exams and early detection.

“I know there’s a reason God gave me breast cancer, and I’m supposed to do something with it,” Stefanie said that year.

The fund might have lost momentum with Stefanie’s passing on Nov. 19, 2009, 11 years after it began. Instead, it grew. In more ways than one.

Today, in addition to breast cancer research, the fund supports many other causes, including the purchase of equipment for the Stefanie Spielman Comprehensive Breast Cancer Center; a patient assistance program; an established Chair in Cancer Imaging; and one of the nation’s largest tissue banks for research. Every dollar raised for the fund directly supports these causes.

Driving these efforts are thousands of devoted volunteers, corporate sponsors, foundations, individual donors and an array of community partners whose annual events contribute to the cause.

“Stefanie taught us so much about inspiring others and fighting for a cause greater than ourselves. It is incredible how deeply this has been embraced in communities all over and beyond Ohio,” says William Farrar, MD, CEO, James Cancer Hospital and Solove Research Institute. “It is because of her passion and commitment that we’ve been able to deliver on our promise to her to continue fighting this fight, and to continue raising money to fund life-saving breast cancer research.”

This story pays homage to the Stefanie Spielman Fund by highlighting several areas where it has contributed to research, equipment and services to help end breast cancer.

Despite its high-tech features, the SSCBC’s atmosphere feels anything but clinical. The staff are caring and empathetic. Many are breast cancer survivors themselves who openly share their stories just as Stefanie did on her own journey.

In these ways, the SSCBC lives up to the vision imagined a decade ago when Stefanie’s legacy was honored at the facility dedication, which was attended by Chris and the couple’s four children. Then-Ohio State President E. Gordon Gee described Stefanie that day in words that capture how her spirit lives on.

“She touched those struggling with their diagnosis and treatments, helping to make their worlds more comfortable, more optimistic and more affirmative. She possessed an uncommon combination of bravery, grace and compassion that continues to resonate through her remarkable legacy.”