Calm in a Crisis 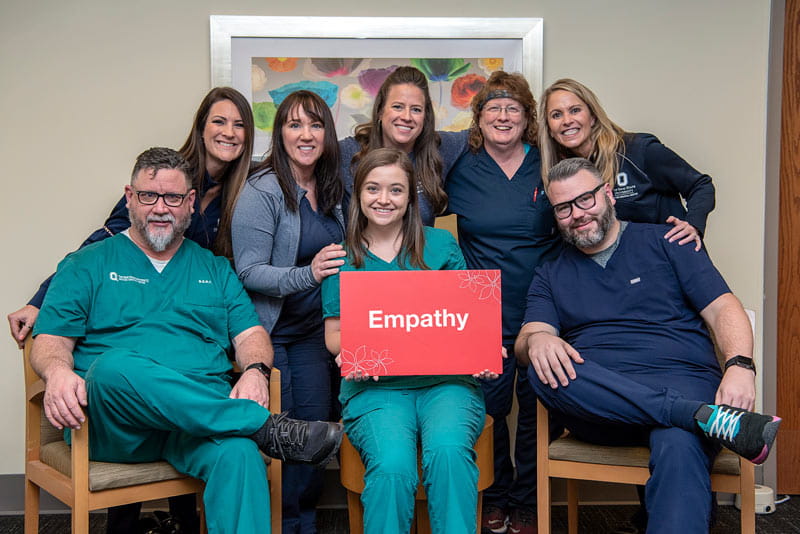 A young man in his mid-20s paces the nursing unit—agitated, confused and threatening to leave. He’s wearing his street clothes and combat boots, resisting nurses’ attempts to get him back in his room to take his medication.

“We introduced ourselves, and not too long into the conversation, we realized the young man was confused about why he was there,” Kristen says. “He thought the cops were coming to get him, and someone was coming out of the TV to get him. A liver condition and military memories were causing his paranoia.”

Kristen and her co-worker calmed the young man and coaxed him back into his room. He agreed to take his medicine, and felt comfortable enough in their presence to fall asleep. “Later, he apologized and thanked us for being there and being calm. If we weren’t there, the nurses would have had to call Security.

“When we encounter a person who is agitated,” she says, “I try to dig a little, build trust and listen to what the person is saying.”

Having the empathy to sit and just be with a person, without judgment, is often the key to reaching that person, she adds.

An Innovative Approach to Workplace Safety

Ohio State’s BERT launched in February 2019. The team responds to emergency behavioral situations on patient floors, meeting people where they are in their anxiety, emotional trauma or grief. It has received close to 1,500 calls since it began in Feb. 2019.

BERT also trains nurses, Environmental Department workers and others to protect patient and staff safety in the face of unpredictable behavior.

BERT nurses and patient care technicians collaborate with physicians and Security. Thus far, they’ve been able to de-escalate tense situations 86% of the time with conversation alone. Only three patients have had to be restrained.

Dr. Moore describes Ohio State as a national leader in behavioral health emergency response. The team, in collaboration with the STAR (Stress, Trauma And Resilience) program, recently received the Corman Impact Award from The Schwartz Center, a nonprofit organization dedicated to strengthening compassionate relationships between patients and caregivers. Ohio State was one of only three hospitals in the nation recognized for making a transformational impact with initiatives to promote compassionate, collaborative care within the organization.

“Empathy is ingrained in what our team does every day,” Dr. Moore says. “If you don’t have it, you won’t be successful.”

Dr. Moore emphasizes the need to see these patients without stigma or judgment. Some have been affected by past emotional traumas or abuse, and Kristen and her team are trained to recognize that. People with opioid or substance abuse who are going through withdrawal are the focus of many BERT interactions.

“We try to uncover what has happened to these people in their lives so that we know how to care for them,” Dr. Moore says. “All of our staff go through trauma-informed care and Crisis Prevention Institute training.”

She says all medical center employees can benefit from key takeaways from the training. They include:

Kristen comments, “We don’t see people when they’re happy. They’re in the middle of a crisis. We need to understand that what they’re doing right now isn’t their permanent mindset. The most important thing is to take time to empathize with people. Sometimes you don’t have to fix it. Just be in the moment with them.”

Kristen developed a passion for behavioral health during nursing school and has worked in psychiatric nursing and corrections.

During BERT’s first year, she has been most inspired by the team’s progress with a young woman who has a history of IV drug use and resulting endocarditis, a heart valve infection. Doctors told her they couldn’t replace her heart valve again if she continued to use drugs.

“She was withdrawn, on edge, antsy,” Kristen recalls. “Our team agreed to come every day to talk about coping skills and goals. She was still cursing at staff after a month.”

BERT members listened and discovered that the young woman really wanted to be outside, but she wasn’t permitted to leave the building. BERT worked with the treatment team to develop a behavioral plan, which granted BERT permission to escort her on walks outdoors. After three months, she went into alcohol and drug rehab. She finished the program but became nervous about maintaining her new sobriety. She ended up back in the Emergency Department with a relapse.

The team from BERT immediately resumed contact with her. “She said she’s going to stay clean,” Kristen reports. “We see her every day. She hasn’t refused a single test and hasn’t had a single outburst.”

Looking back on accomplishments over the past year, Kristen notes, “We’ve grown so much. We have physicians, case managers and Risk Management calling us. It’s really rewarding to know people are excited to see us and want our advice.”

One medical-surgical clinical care coordinator describes the impact of BERT:

“The nurses integrated the recommendations from BERT into the patient’s plan of care. This assisted in de-escalating the patient’s aggressive behavior, which decreased the severity of future behavioral incidents. The patient appeared to be a completely different person after his encounter with BERT. He was now pleasant and compliant with the physicians and nursing staff.”

This is part of a series describing how Ohio State faculty and staff are leading the way by embodying the Buckeye Spirit in everything they do through shared values of empathy, ownership, inclusiveness, determination, innovation and sincerity.