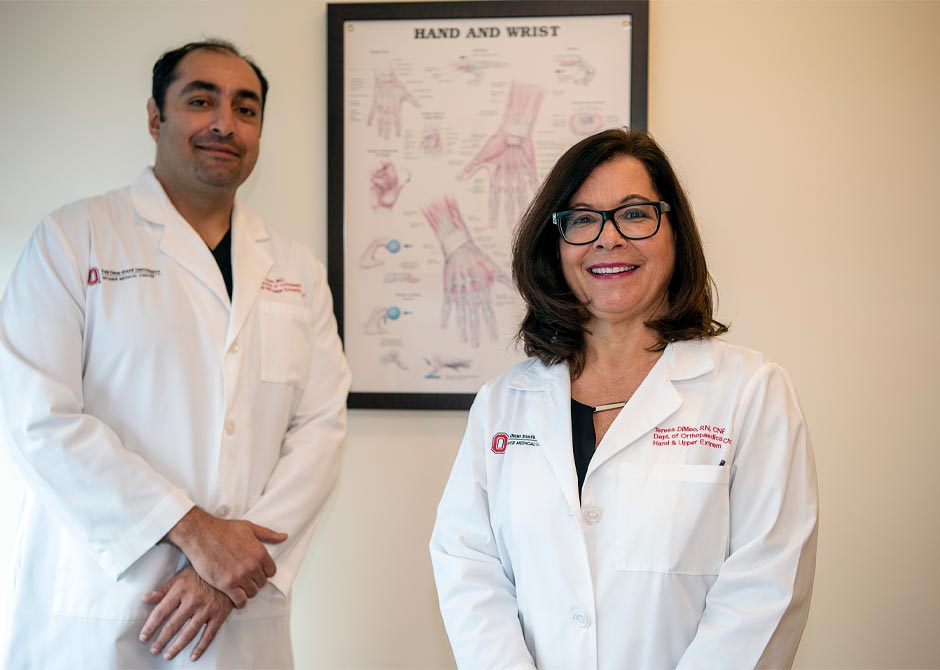 Making a long-distance call on a Wednesday evening to assist an injured skier in a Canadian emergency department (ED) is just one way that Teresa DiMeo, MS, APRN-CNP, CNOR, nurse practitioner for the Hand and Upper Extremity Center at The Ohio State University Wexner Medical Center, takes complete ownership of her job.

Jim Schumer, MD, a Columbus ophthalmologist and avid skier, was on the slopes last spring with his son in Whistler, British Columbia, when his misreading of the terrain landed him painfully on his wrist.

“I heard it break,” he recalls. “The ski patrol came, and I took the slide of shame down the mountain on a sled. They have an ED at the bottom of the mountain where they took X-rays. I had a complete fracture in three places just above the wrist.”

Dr. Schumer’s livelihood as an ophthalmologist depends on using his hands and wrists to perform delicate eye surgeries such as corneal transplants, removing cataracts and doing LASIK. He had a full caseload of surgeries scheduled for the following week.

He and his wife discussed whether to stay in Canada for surgery or go home to Columbus. They called a friend at home who is part of the Columbus medical community, and she insisted that Dr. Schumer talk to DiMeo.

A few minutes later, DiMeo called Dr. Schumer to find out what was happening and asking if she could help. She assessed the situation and promised to have the director of hand and upper extremity surgery, Hisham Awan, MD, call that evening.

“Within a span of 30 minutes, Dr. Awan called me,” Dr. Schumer says. “He asked if I could get back to Columbus, saying ‘I have a time slot for you Friday morning.’”

Dr. Schumer flew back to Columbus with a splint on his arm and showed up Friday morning, March 22, to meet DiMeo and Dr. Awan about 30 minutes before his surgery.

He lost no time discussing the most important things weighing on his mind.

“I’m crazy for golf, and I asked if they knew what Augusta National is,” Dr. Schumer says. “I said, ‘I have a tee time on May 2 and there’s no rain check.’ Dr. Awan looks up to the ceiling and then looks at me and says, ‘You’re going to play.’”

DiMeo counseled him on the risks and explained that he would be doing these activities off protocol. Once he made the decision, however, she supported him in every way she could.

The surgery to repair his wrist required a plate and 11 screws. With constant icing and minimal pain medicine, Dr. Schumer accomplished his goal of performing 25 surgeries only five days after his own surgery.

He has the utmost appreciation for Ohio State’s hand team. “I could not have been more satisfied with the care and communication. After my surgery, I contacted Teresa and Dr. Awan multiple times a day. They couldn’t have been more attentive to me.

“Teresa was incredible,” he says. “Every step of the way, she was on top of things. She’s a dynamo! She answered my questions the first couple of weeks about what I could and couldn’t do in order to heal.”

Despite the risks, Dr. Schumer pursued the opportunity to golf with his son at one of the nation’s most famous golf courses.

“Six weeks after surgery, I teed it up at Augusta National,” he says. “I hurt and I didn’t play well, but it was absolutely worth it.”

Dr. Schumer’s wrist surgery was his first experience as a patient at Ohio State. He says it could not have turned out better for him. “It was off the charts. It exceeded my expectations. Teresa took ownership, she managed the situation and made it happen for someone who was truly desperate to get back and rehabbed as quickly as possible. I can’t thank Teresa, Dr. Awan and the team enough for what they did to get me back to 100% so quickly.”

DiMeo acknowledges that Dr. Schumer’s case was unique, but she notes a common thread in her approach to serving all of her patients. “I try to advocate, streamline and create the same continuity of care for all of my patients. The ability to effectively communicate with a multitude of different departments and to have our patients’ best interests at the center of every decision is instrumental to high-quality care.”

Dr. Awan praises DiMeo’s dedication, saying, “She’s always accessible and available to patients. They can ask her a hundred questions, and she patiently answers them. She takes ownership of their complete care, before and after surgery. I get unsolicited comments all the time about how wonderful and amazing Teresa is.”

“I try to envision that every patient’s situation and needs are like one of my family members’,” DiMeo says, “and I want to personally deliver the best care that I can.”

Her own experience of a painful sports injury that restricted her work and daily activities makes her more empathetic toward her patients as they rehab and recover from surgery.

Through her own determination, DiMeo motivates and encourages patients to keep working toward their recovery. “Patients are so fond of her,” Dr. Awan says. “She’s a great face for the Hand and Upper Extremity Center. She has so many connections in Columbus, and people trust her opinion. We’re really lucky to have her.”

DiMeo is equally grateful to be part of the orthopedic team. “The ability to help grow and develop the Hand and Upper Extremity Center has not only allowed me to care for patients with injuries and conditions from the shoulder to the fingertip, it has provided me the platform to look at the ‘whole’ patient and provide the best clinical care for each unique situation. The Department of Orthopaedics, my team, and Ohio State have afforded me the ability to do what I love and love what I do.”

This is part of a series describing how Ohio State faculty and staff are leading the way by embodying the Buckeye Spirit in everything they do through shared values of ownership, empathy, inclusiveness, determination, innovation, sincerity.