Dystonia is a movement disorder that causes involuntary contractions of your muscles. These contractions result in twisting and repetitive movements. Sometimes they are painful.

There are different forms of dystonia that may affect only one muscle group, or muscles throughout the body. Dystonia can cause a large variety of involuntary movements. The neck may turn or pull involuntarily. The eyes may blink rapidly or close.

Some people have tremor or difficulty speaking due to a breathy or strained voice. Some people develop a foot cramp and then a tendency for the foot to turn or drag. Some dystonia manifests only when trying to do a specific task, such as involuntary movements that make writing, playing golf or playing a musical instrument difficult. Some patients develop generalized dystonia, in which many regions of the body are affected by movements.

The cause of dystonia is unknown. Some forms of dystonia are genetic and are inherited, but often there is no family history. Researchers are still trying to understand what causes dystonia, including how gene errors, called mutations, lead to the disease. We believe that dystonia results from problems in part of the brain that controls movement, called the basal ganglia. Sometimes infections, strokes or brain damage in this part of the brain can lead to dystonia. Researches think that defects in brain chemicals called neurotransmitters are causing the cells in the basal ganglia to not function normally, leading to dystonia.

There is no cure for dystonia, but treatments such as medications by mouth, injections with botulinum toxin and brain surgery can reduce dystonia and help you have a more normal life.

We provide tailored rehabilitation for people living with movement disorders.

Our neurologists experienced in movement disorders discuss your medical history and perform a neurological exam. We may order brain imaging – such as magnetic resonance imaging (MRI) or computerized tomography (CT) scan – or laboratory studies to look for causes of the dystonia.

If your history and neurological exam suggest a particular genetic dystonia, we may refer you to a genetic counselor and draw blood for genetic testing. Our genetic counselor specializing in movement disorders will assist your physician in evaluating you. She can explain genetic testing options and thoroughly explain results and their implications for you and other family members who wish to be tested.

Some forms of genetic dystonia include:

There is no cure for dystonia. Current treatment strategies aim to decrease the dystonia, so that you can have a better quality of life. 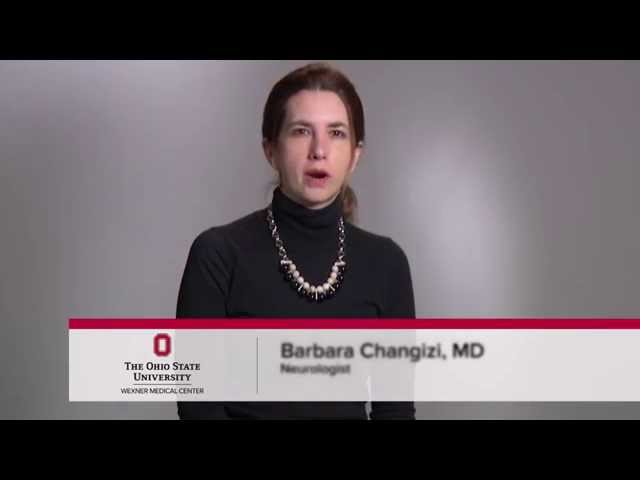 Our Movement Disorders Clinic, along with the Center for Neuromodulation, is involved in research to improve the lives of people with dystonia. This includes clinical trials of new medications, trials involving surgical therapies and basic science research looking for the cause of and, ultimately, the cure for dystonia.

Why choose Ohio State for treatment of dystonia?

Comprehensive Care: We diagnose, manage and treat dystonia at our Movement Disorders Center. Our experts include:

Deep Brain Stimulation in the Center for Neuromodulation: Our neurosurgeons are among the pioneers who first developed this surgery well over a decade ago and are some of the most experienced in the country in helping patients with severe dystonia. We have helped hundreds of people by implanting and programming devices to lessen the effects of dystonia. Ohio State is the only hospital offering deep brain stimulation (DBS) in central Ohio.

Nationally Recognized: Ohio State is routinely recognized for our excellence in neurosurgery, neurology and neuromodulation.

Please bring your medical records from all prior neurology visits, along with reports from brain and spine imaging such as MRIs and CT scans. Bring a list of your medications, including the dose of the pills and how many pills you take throughout the day. Please also try to obtain records of prior medications you have taken to treat the dystonia and write down what happened when you took these. Also bring results of any genetic testing you have had.